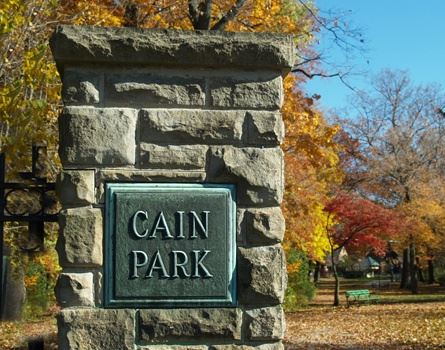 Conceived in the mid-thirties, Cain Park is rich in history. The brainchild of Heights High School drama teacher Dr. Dina Rees Evans and Cleveland Heights Mayor Frank C. Cain, Cain Park's original purpose remains unaltered. Owned and operated by the City of Cleveland Heights, it is the living symbol of the City's commitment to nurturing quality programming in the arts for an area population that undeniably thrives on it. It is one of the City's most visible ways of saying that Cleveland Heights is a wonderful place to live, work and raise families.

As Evans recounts in her 1980 book on the Cain Park Theatre, The Halcyon Years, the creation of a legendary summer theater program happened almost by accident. She had come to Cleveland Heights in 1930 to research a theory for her Ph.D.

Evans believed that theater education helped make "dramatic" transformations in students' attitudes and social behaviors as well as helped them succeed in other areas. She proved her theory, earned a doctorate in 1932, and decided to continue teaching drama at Heights High. Her Heights Players grew and an adult theater club developed in 1932 called the Civic Theatre of Allied Arts, sponsored by the Recreation Division of the Cleveland Heights Board of Education.

In the summer of 1934, these two groups wanted to collaborate on an outdoor presentation of A Midsummer Night's Dream. Coordinating theatre-minded adults with high school dramatic students, "Doc" Evans produced the first outdoor play presented as a community enterprise. It was "staged" at the foot of the sledding hill at Taylor and Superior (during the Great Depression Works Progress Administration laborers had cleared out the ravine between Taylor and Lee roads, removing trees for a sledding hill and quarrying sandstone from the creek that ran through the area). Needing a name for the performance location, "Doc" Evans hastily dubbed it "Cain Park" after the mayor, Frank Cain, who raised no objection.

Dream was such a successful community production, the City needed little convincing that all would benefit from building a municipally owned and operated theater. Because of their vision, and in cooperation with, the labor of the WPA, the capital of the Soldiers and Sailors Relief Fund, and the support of local philanthropists such as John D. Rockefeller, the Amphitheater was completed in 1938 and the Alma Theater (named for Cain's wife) was added in 1944. "Doc" Evans was given the position of theatrical director, which she held until 1950. She stressed the theater's role as a teaching institution in the community and under her guidance, Cain Park attracted aspiring young talents such as Broadway music director Jack Lee, producer Ross Hunter, and actors Hal Holbrook, Dom DeLuise, Carol Kane, Jack Weston and Pernell Roberts who performed on sets designed by the nationally acclaimed industrial artist Viktor Schreckengost, among others. In 1942, Cain Park was touted in a Family Circle article as the only "municipally owned and operated outdoor theatre of its kind in the United States."

In the mid- 1960s, the Amphitheater was home to the very popular Cain Park Teen Theater under the direction of Jerry Leonard. Classes in acting, dance and stagecraft were taught by highly respected professionals from across the country and from the Cleveland area. Leonard was a student of Doc Evans at Heights High and taught for her while in high school at Cain Park. In the early 60's he ran programs at both Cain Park and Wiley.

Through the 1970s, almost all Cain Park productions were staged in the Alma Theater, leaving the Amphitheater dark. In 1978, Cain Park alumnus David Shaber scouted the Amphitheater for the location of his movie, "Those Lips, Those Eyes." These improvements, along with renewed public interest in the facility, enabled the City to begin staging musical productions there and open it up for concerts and dancing.

The facility began to re-emerge as a cultural center for the community in the 1980s. Its scope became magnified and diversified in ways that began to solidify its reputation as a unique alternative on the cultural arts scene. In addition to stage productions, Cain Park hosted events that not only made the facility treasured among the residents who used it, but also acknowledged on a statewide level. The Ohio Parks and Recreation Association awarded its highest honor for Park Development Award in 1985 to the City of Cleveland Heights for Cain Park. In 1987, the City of Cleveland Heights received the Governor's Award for the Arts "in recognition of the City's support for the arts through Cain Park programs over the last 49 years."

Two years later, Cain Park underwent a $5 million facelift as a result of the parks improvement bond issue passed by Cleveland Heights voters in 1987. Among improvements made were a roof for the renamed Evans Amphitheater, a new entrance to the Alma Theater, improved ventilation, and more comfortable seating in both theaters. Cain Park received the Northern Ohio Live Award of Achievement in Architecture for this renovation and an honorable mention in Nightlife for an "innovative summer season that helped transform the park into a thriving, eclectic entertainment center." That same year it also received the Dottie Mullen Arts and Humanities Award from the Great Lakes Regional Council of the National Recreation and Park Association.

In 1990, a variety of services were added to make the facility more functional and accessible to the public. Among these was the introduction of a computerized ticketing service, a new handicap drop-off/ parking, and a series of Cleveland Heights family discounts. The Cain Park Arts Festival has been consistently ranked among the top festivals in the country by the national professional artist magazine, Sunshine Artist. The Ohio Theatre Alliance recognized Cain Park in 1996 for outstanding achievement in theatre in the State of Ohio. And in 1997, Cain Park received the Arts and Access Award from Professional Flair for its accessibility to people with disabilities.

Educational activities at Cain Park today continue to reflect the important role the arts play in instilling values in our society. The Cain Park School for the Arts is offered for children in grades 3-8 and focuses on music/movement, visual arts, theatre, and creative writing; several special workshops are arranged throughout the summer with professional performers booked at Cain Park as well as a series of concerts for children and families. Since 1992 the Cain Park Theatre Internship Program has provided insight and inspiration for undergraduate and graduate students with backgrounds in arts administration, marketing, and theatre production.

Renovation and restoration continues at Cain Park. In 1998, the Colonnade (covered picnic area behind the Amphitheater lawn) received a new roof structure, upgraded lighting, and a new floor while retaining its original stonework façade, which was cleaned and repaired. It was the Evans Amphitheater's turn for a facelift in 2002-03 when the catwalks, rigging, and 1262 seats (originally installed in 1989) were repainted.

At Cain Park's dedication in 1938, Mayor Frank Cain counseled: "Treat it well, keep it on a high plane, and above all, support and enjoy it." His successors continue to heed his advice.